1,450 complaints received by the Advertising Standards Authority for Ireland (ASAI) in 2021

by Seona Parker
Comments are off

on the basis that an advertisement was perceived to be ‘misleading’

A total of 1,450 written complaints concerning 959 advertisements were received by the Advertising Standards Authority for Ireland (ASAI) last year, according to the organisation’s 2021 Annual Report which was released today. This represents a 12% decrease on the number of complaints received in 2020.

The ASAI, which is the independent self-regulatory body committed, in the public interest, to promoting the highest standards of marketing communications, found that 68 advertisements were in breach of the ASAI’s Code of Standards for Advertising and Marketing Communications.

The ASAI Annual Report outlines that 73% of the complaints made in 2021 were on the basis that an advertisement was misleading, while 9% were made on the basis that an advertisement was offensive. There were also a wide range of other issues covered by the ASAI Code that were raised by members of the public, including concerns about health & beauty, motoring, food and beverages, telecommunications and alcohol advertising.

The ASAI was established in 1981 and the objective of the ASAI Code is to ensure that all commercial marketing communications are ‘legal, decent, honest and truthful’. The ASAI Code covers commercial marketing communications and sales promotions in all media in Ireland including digital (online banners, websites and social platforms), print, outdoor, radio, TV, leaflets/brochures, and direct marketing.

The ASAI offers advertisers, agencies, media and promoters a copy advice service on whether a proposed marketing communication or sales promotion conforms to the Code. Copy advice is communicated confidentially, is non-binding and is given free of charge. In total, 117 requests from advertisers, advertising agencies and media for copy advice were received in 2021, an increase of almost 2% since 2020. The ASAI [email protected] service serves as an authoritative opinion given by the Executive, but does not bind the ASAI Complaints Committee.

Complaints by sector are as follows, with comparative figures for 2020 and 2019:

Complaints by Media are as follows, with comparative figures for 2020 and 2019:

The number of media mentioned in relation to complaints is greater than the number of complaints in 2021. This is because complainants often mention multiple media when they describe where they saw or heard the marketing communication concerned. ASAI captures all the media they mention.

The ASAI conducts ongoing monitoring of advertising across all media including monitoring compliance with the adjudications of the Independent Complaints Committee.

In terms of engagement highlights, the ASAI attended a meeting of the Joint Oireachtas Committee on Tourism, Culture, Arts, Sport and Media to discuss the Online Safety and Media Regulation Bill. The ASAI recognises and supports that the new media commission will oversee the new regulatory framework for online platforms based in Ireland. However, it also believes that no one regulator could apply an effective advertising complaints mechanism for consumers across the EU and that the existing network of members of the European Advertising Standards Alliance, including the ASAI, should have a role as part of the regulatory framework.

New rules were introduced in 2021 for advertising of High Fat, Salt and Sugar (HFSS) products. These rules apply to non-broadcast media and include both restrictions on the amount of HFSS advertising and on the content.

The ASAI continued its engagement with influencer marketing and carried out research which showed that there were continuing concerns about transparency. The ASAI hosted a webinar called ‘#InfluencerMarketing in 2021 and beyond – retaining trust through transparency’ which was well attended by influencers and practitioners from the advertising space. 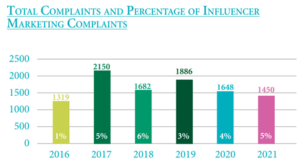 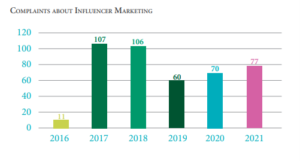 Commenting on the 2021 Annual Report, Orla Twomey, CEO of the ASAI, said:

“The ASAI is committed to promoting the highest standards of marketing communications in Ireland and our 2021 Annual Report is testament to this statement, conveying the sheer breadth of the ASAI’s activities across a range of areas including compliance, scheduled monitoring, copy advice, brand awareness, complaints investigation and adjudication, advisory corporate services and policy.

“The engagement with the ASAI and compliance with the adjudication of the independent Complaints Committee, demonstrates that advertisers in Ireland are completely on board with the ASAI in our bid to protect consumers and ensure the highest standards of advertising and marketing communications.

“2021 saw the ASAI continue to deeply engage in all our service offerings. In particular, there was a valuable increase with both our influence and strong contributions in the area of policy and Code, including recognising and supporting that the new media commission will oversee the new regulatory framework for online platforms based in Ireland and the introduction of new rules for advertising of High Fat, Salt and Sugar (HFSS) products that apply to non-broadcast media and include both restrictions on the amount of HFSS advertising and on the content itself. We also continued our engagement with influencer marketing through the #InfluencerMarketing webinar we hosted where we outlined the research previously carried out, showing the importance of authenticity and transparency. The requirement for ASAI contributions in these areas, all of national importance, are indicative of the place we hold as an acknowledged expert on setting standards for advertising.”

“From initial beginnings on Kildare Street, Dublin 40 years ago, the ASAI has developed and evolved to being recognised for its strong standards and expert knowledge on advertising regulation. Equally, ASAI is regarded as a key player alongside relevant State and private sector organisations operating in this space.

With the economic impact of the COVID pandemic resulting in a contraction of advertising spend in 2020, the industry experienced a recovery to pre-pandemic levels in 2021. ASAI has experienced a corresponding reduction in advertising complaint levels over the pandemic period, compared to the immediate prior years, even with the recovery in advertising activity. Fostering consumer confidence and trust in advertising offline and online continues as a core objective of the ASAI and the robust complaints mechanism for consumers to challenge advertising content remains an imperative for the industry and for ASAI to facilitate and support.”

Check out www.asai.ie for more details and to also access a

copy of the 2021 ASAI Annual Report

The ASAI is a founder member of the European Advertising Standards Alliance (EASA). EASA is a non-profit organisation based in Brussels which brings together 27 national European advertising self-regulatory organisations (SROs), 13 organisations representing the advertising industry in Europe – advertisers, agencies and various forms of media including television, radio, press, digital and outdoor poster advertising, and one digital pure player.

The ASAI is also a founder member of the International Council of Ad Self-Regulation which is a global platform which promotes effective advertising self-regulation at a global level. ICAS members include Self-Regulatory Organizations (SROs) and other national, regional and international bodies active on all continents.

Further information on advertising self-regulation, the ASAI and the operation of the system is available at www.asai.ie

This website uses cookies to improve your experience while you navigate through the website. Out of these, the cookies that are categorized as necessary are stored on your browser as they are essential for the working of basic functionalities of the website. We also use third-party cookies that help us analyze and understand how you use this website. These cookies will be stored in your browser only with your consent. You also have the option to opt-out of these cookies. But opting out of some of these cookies may affect your browsing experience.
Necessary Always Enabled
Necessary cookies are absolutely essential for the website to function properly. This category only includes cookies that ensures basic functionalities and security features of the website. These cookies do not store any personal information.
Non-necessary
Any cookies that may not be particularly necessary for the website to function and is used specifically to collect user personal data via analytics, ads, other embedded contents are termed as non-necessary cookies. It is mandatory to procure user consent prior to running these cookies on your website.
SAVE & ACCEPT