1,648 complaints received by the Advertising Standards Authority for Ireland (ASAI) in 2020 and 63 advertisements found to be in breach of ASAI Code

by Seona Parker
Comments are off

on the basis that an advertisement was perceived to be ‘misleading’

A total of 1,648 written complaints concerning 1,072 advertisements were received by the Advertising Standards Authority for Ireland (ASAI) last year, according to the organisation’s 2020 Annual Report which was released today. This represents an 12.6% decrease on the number of complaints received in 2019, while the number of advertisements complained about increased by just over 22% compared to the same figure for 2019.

The ASAI, which is the independent self-regulatory body committed, in the public interest, to promoting the highest standards of marketing communications, found that 63 advertisements were in breach of the ASAI’s Code of Standards for Advertising and Marketing Communications.

The ASAI Annual Report outlines that 68% of the complaints made in 2020 were on the basis that an advertisement was misleading, while 12% were made on the basis that an advertisement was offensive. There were also a wide range of other issues covered by the ASAI Code that were raised by members of the public, including concerns about promotional marketing practices, food and non-alcoholic beverages, health & beauty, e-cigarettes, children, alcohol advertising, slimming and gambling.

The ASAI was established in 1981 and the objective of the ASAI Code is to ensure that all commercial marketing communications are ‘legal, decent, honest and truthful’. The ASAI Code covers commercial marketing communications and sales promotions in all media in Ireland including digital (online banners, websites and social platforms), print, outdoor, radio, TV, leaflets/brochures, and direct marketing.

The ASAI offers advertisers, agencies, media and promoters a copy advice service on whether a proposed marketing communication or sales promotion conforms to the Code. Copy advice is communicated confidentially, is non-binding and is given free of charge. In total, 115 requests from advertisers, advertising agencies and media for copy advice were received in 2020, 18% lower than received in 2019. The ASAI copyadvice@asai.ie service serves as an authoritative opinion, given by the Executive but does not bind the ASAI Complaints Committee.

Complaints by sector are as follows, with comparative figures for 2019 and 2018:

Complaints by Media are as follows, with comparative figures for 2019 and 2018:

The ASAI conducts ongoing monitoring of advertising across all media including monitoring compliance with the adjudications of the Independent Complaints Committee.

In terms of engagement highlights, ASAI welcomed Google as the first corporate member of the European Advertising Standards Alliance (EASA), and a partner of the ad self-regulatory (SR) network. This new partnership with a well-established and recognised advertising self-regulatory network demonstrates Google’s commitment to responsible advertising.

In 2020, the ASAI also continued its ongoing focus on providing information and guidance to the influencer and blogger industry. As part of this, ASAI conducted research around consumer sentiment in this area which revealed just over half (51%) of people in Ireland say they are concerned by a lack of transparency in influencer marketing. With transparency being a significant aspect of the ASAI’s brief in seeking to maintain the highest standards in advertising, this statistic demonstrates the level of consumer concern in a growth marketing area. The concept of transparency is one that the ASAI continues to strongly promote amongst advertisers, and particularly in the growth area of influencer marketing. 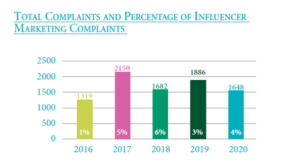 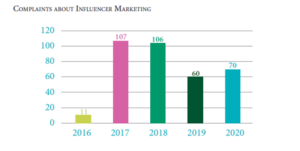 Commenting on the 2020 Annual Report, Orla Twomey, CEO of the ASAI, said:

“The ASAI is committed to promoting the highest standards of marketing communications in Ireland and our 2020 Annual Report is testament to this statement, conveying the sheer breadth of advertisements adjudicated on by the ASAI’s independent Complaints Committee.

“The engagement with the ASAI and compliance with the adjudication of the independent Complaints Committee, demonstrates that advertisers in Ireland are completely on board with the ASAI in our bid to protect consumers and ensure the highest standards of advertising and marketing communications.

“2020 saw the ASAI continue to deeply engage in all our service offerings. In particular, there was a valuable increase with both our influence and strong contributions in the area of policy and Code including: unsubstantiated or misleading claims about Covid-19, welcoming Google to the EASA Network, and influencer marketing and recognisability. The requirement for ASAI contributions in these areas, all of national importance, are indicative of the place we hold as an acknowledged expert on setting standards for advertising.”

“In the 40 years since the Advertising Standards Authority for Ireland was founded in 1981 by some of the then most far-seeing fathers of our industry, there have been many years in which challenges were real, varied, and unpredictable and had to be grappled with.

“However, it is doubtful if any year threw up the extreme conditions that we have witnessed in 2020. Because of the Covid-19 pandemic, our worlds were, and continue to be, turned upside down when all normal and predictive thinking was thrown out the window. Working and communicating remotely became, and remain, the necessary norm.

“It is my honour to pay tribute to everyone associated with the ASAI for their quite remarkable dedication, loyalty and supports during the past twelve months. While it is difficult to predict how 2021 will be, the one thing we can all be sure of is that 2020 has given us the opportunity to successfully leverage our extensive capabilities as the Irish advertising regulator. We have embraced the challenges and opportunities presented while continuing to thrive and flourish, always with a view to ensuring the highest standards of advertising for all stakeholders.”

Check out www.asai for more details and to also access a

copy of the 2020 ASAI Annual Report

The ASAI is a founder member of the European Advertising Standards Alliance (EASA). EASA is a non-profit organisation based in Brussels which brings together 28 national European advertising self-regulatory organisations (SROs), 13 organisations representing the advertising industry in Europe – advertisers, agencies and various forms of media including television, radio, press, digital and outdoor poster advertising, and one digital pure player.

The ASAI is also a founder member of the International Council of Ad Self-Regulation which is a global platform which promotes effective advertising self-regulation at a global level. ICAS members include Self-Regulatory Organizations (SROs) and other national, regional and international bodies active on all continents.

Further information on advertising self-regulation, the ASAI and the operation of the system is available at www.asai.ie

This website uses cookies to improve your experience while you navigate through the website. Out of these, the cookies that are categorized as necessary are stored on your browser as they are essential for the working of basic functionalities of the website. We also use third-party cookies that help us analyze and understand how you use this website. These cookies will be stored in your browser only with your consent. You also have the option to opt-out of these cookies. But opting out of some of these cookies may affect your browsing experience.
Necessary Always Enabled
Necessary cookies are absolutely essential for the website to function properly. This category only includes cookies that ensures basic functionalities and security features of the website. These cookies do not store any personal information.
Non-necessary
Any cookies that may not be particularly necessary for the website to function and is used specifically to collect user personal data via analytics, ads, other embedded contents are termed as non-necessary cookies. It is mandatory to procure user consent prior to running these cookies on your website.
SAVE & ACCEPT